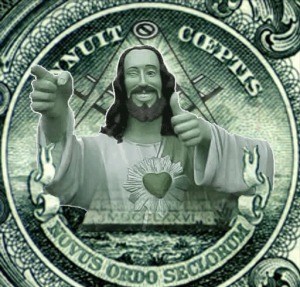 It is very effective to mobilize mass support against a scapegoated enemy by claiming that the enemy is part of a vast insidious conspiracy against the common good. The conspiracist worldview sees secret plots by tiny cabals of evildoers as the major motor powering important historical events; makes irrational leaps of logic in analyzing factual evidence in order to “prove” connections, blames social conflicts on demonized scapegoats, and constructs a closed metaphysical worldview that is highly resistant to criticism.~1

When conspiracist scapegoating occurs, the results can devastate a society, disrupting rational political discourse and creating targets who are harassed and even murdered. Dismissing the conspiracism often found in right-wing populism as irrational extremism, lunatic hysteria, or marginalized radicalism does little to challenge these movements, fails to deal with concrete conflicts and underlying institutional issues, invites government repression, and sacrifices the early targets of the scapegoaters on the altar of denial. An effective response requires a more complex analysis.

The Dynamics of Conspiracism

The dynamic of conspiracist scapegoating is remarkably predictable. Persons who claim special knowledge of a plot warn their fellow citizens about a treacherous subversive conspiracy to attack the common good. What’s more, the conspiracists announce, the plans are nearing completion, so that swift and decisive action is needed to foil the sinister plot. In different historical periods, the names of the scapegoated villains change, but the essentials of this conspiracist worldview remain the same.~2

George Johnson explained that “conspiratorial fantasies are not simply an expression of inchoate fear. There is a shape, an architecture, to the paranoia.” Johnson came up with five rules common to the conspiracist worldview in the United States:~3

“The conspirators are internationalist in their sympathies.

“[N]othing is ever discarded. Right-wing mail order bookstores still sell the Protocols of the Elders of Zion…[and] Proofs of a Conspiracy [from the late 1700’s].

“Seeming enemies are actually secret friends. Through the lens of the conspiracy theorists, capitalists and Communists work hand in hand.

“The takeover by the international godless government will be ignited by the collapse of the economic system.

“It’s all spelled out in the Bible. For those with a fundamentalist bent, the New World Order or One World Government is none other than the international kingdom of the Antichrist, described in the Book of Revelation.

Conspiracism can occur as a characteristic of mass movements, between sectors in an intra-elite power struggle, or as a justification for state agencies to engage in repressive actions. Conspiracist scapegoating is woven deeply into US culture and the process appears not just on the political right but in center and left constituencies as well.~4 There is an entrenched network of conspiracy-mongering information outlets spreading dubious stories about public and private figures and institutions. They use media such as printed matter, the internet, fax trees, radio programs, videotapes and audiotapes.~5

If you want to jump out of this article, try these related pages: