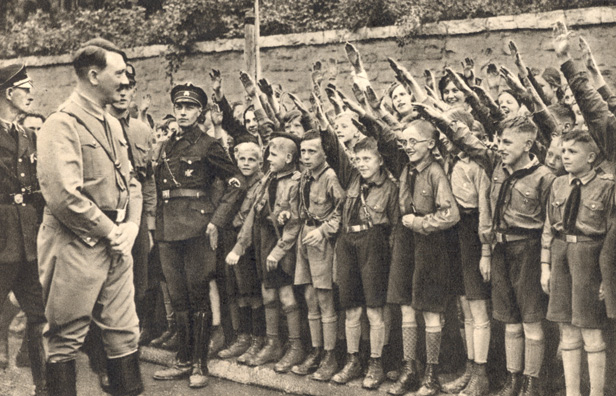 American Pastor: Christian Children Should Be Taught To Be ‘Extremists’ Like Hitler Youth, ISIS

PAYPAL : we value your continued support and donations.

Bert Farias is a Christian minister, a columnist, and perhaps the only person in the world who took one look at the Nazis and ISIS and thought “Now, that’s who we should be emulating!”

In an article he wrote for Charisma News, Farias argues that Christianity needs more “soldiers” for Christ and the only way to achieve that is radicalizing the youth. Hey, it worked for Hitler.

Years ago I was part of an apostolic team of fathers who mentored, equipped and empowered radical youth. We believed then and still do now that we are to help define and lead a countercultural movement. It is our passion to upset the sinful status quo of society and the church. Youth are key!

In 1933 Hitler said, “If I can separate the youth of Germany from their parents I will conquer this nation.” He started a movement called “The Brown Shirts” in which 100,000 youth stood in Berlin with their right hand raised and screaming. “Hitler, we are yours!” Imagine our youth pledging that kind of allegiance to King Jesus!

Extending the logic further, Farias looks at “revolutionary countries” where the “youth are trained in combat and weapons” and seethes with jealousy.

They are taught principles of Communism and the tenets of militant Islam. They give themselves wholeheartedly to the goal of world domination. Someone once said that Satan is preparing his army, but the church is entertaining her children. We need a radical departure from the standard method of training young men and women for ministry. We need a touch of wholesome extremism to launch a counterculture JESUS revolution!

Farias doesn’t seem to worry that along with all those guns in the hands of children comes some of the worst human rights atrocities being committed in the modern world. Nor did Hitler’s Youth represent a shinning example of humanity. In fact, one might argue that it was the very fanatical extremism being taught and assimilated into these groups that directly led to violence, intolerance and, in the case of both the Nazis and ISIS, genocide.

Equally disturbing is the fact that Farias seems singularly focused on the disturbing maxim “Get them while they’re young.” His entire goal appears to be to start training kids at a young age to be closed-minded. The more radical, the better. As Little Green Footballs points out, Farias’ ministry’s website is full of allusions to warfare, soldiers and fighters. One section reads:

The Training of a New Breed

For a new breed of troops to arise, there must be given a new breed of training. For many of my past trainees have only been trained for the easy and the soft and not for the rigorous and the hard. Many have been trained of the letter but not of the Spirit and so they stand unequipped for the battle and an easy target for the enemy. Sow to the spirit and so shall their swords be sharpened for the flesh has made them dull. For in the flesh is weariness and hands that hang down with the shield of faith. Prepare them to march to a different spirit. Root out the flesh, selfish ambition, and pride and train them to walk by the Lord’s side for the Lord resists the proud but gives grace to the humble.

He insists that his little “extremists” will fight not with “earthly weapons” but with the “love of God,” but seems to forget that extremism – whether it be in the name of Allah, Jesus, or German ethnic supremacy – inevitably leads to dehumanization and intolerance of those whom disagree with the “true believers.” It marks the very first step towards oppression and violence.

PAYPAL : we value your continued support and donations.

2 thoughts on “American Pastor: Christian Children Should Be Taught To Be ‘Extremists’ Like Hitler Youth, ISIS”