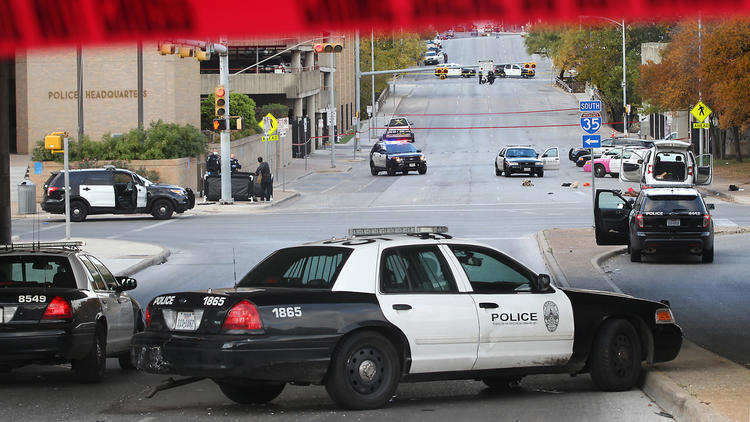 Austin police investigate the scene where an officer shot and killed a man who had shot at least 100 rounds into government buildings.

Larry Steven McQuilliams, who fired more than 100 gunshots at government offices in Austin, Texas, last week until he was killed by police, was a “homegrown American extremist” connected to a right-wing Christian group, police said Monday.

“He had hate in his heart,” Austin Police Chief Art Acevedo said.

Investigators record the scene where a gunman shot at least 100 rounds into buildings in downtown Austin, including the Mexican consulate and the federal courthouse.

FBI personnel photograph the federal courthouse in Austin, TX and mark evidence at the scene.

Police chief Art Acevedo briefs media at a press conference on the gunman who targeted buildings in downtown Austin including the Mexican consulate, the federal courthouse and Austin police headquarters.

McQuilliams, 49, belonged to the Phineas Priesthood, police said, describing the organization as a white supremacist group based in the Pacific Northwest that is responsible for armed robberies, abortion clinic bombings and planned attacks on FBI buildings.

He served time for a 1992 armed robbery and was released in 2000, police said, but acted alone in carefully planning Friday’s attack.

Days earlier, McQuilliams had rented a white van and packed it with supplies, including several guns, ammunition, a gas mask, homemade explosives, a list of 34 targets (among them two churches) and a book, “Vigilantes of Christendom,” in which he left a note describing himself as a priest against “anti-God people,” Acevedo said.

The first shots were reported at 2:18 a.m. Friday as bar patrons were spilling into the streets of downtown Austin, the state capital. The shooter targeted police headquarters, a federal courthouse and the Mexican Consulate.

Austin Police Sgt. Adam Johnson was nearby with a mounted patrol. As McQuilliams fired what sounded like an automatic rifle, Johnson gripped the reins of two horses with one hand and, with the other, took aim in the dark, Acevedo said, firing a single shot that struck and killed McQuilliams. No one else was injured in the attack.

At the medical examiner’s office, officials discovered McQuilliams had scrawled a message on his chest, beneath a tactical vest stuffed with ammunition: “Let me die.”

He did not leave a note specifically explaining his motive.

Neighbors at his south Austin apartment complex described him as an impoverished, gentle loner who rode his bicycle to work at a carwash. Investigators said he appeared “upset by the fact that he could not find employment” and, “in his eyes, many immigrants had more services afforded to them than he had himself,” said Christopher Combs, FBI special agent in charge of the San Antonio division office.

Because McQuilliams targeted the Mexican Consulate and the federal courthouse, the FBI is assisting in the investigation.

The police chief said investigators were still trying to determine whether McQuilliams was mentally ill and how he managed to obtain several guns as a convicted felon.

“We have a country where it’s way too easy for people to use straw purchasers to get these guns in their hands,” Acevedo said, noting that he and other police chiefs have called for legislation that would restrict straw purchases of guns “to ensure we protect the 2nd Amendment by keeping them in the hands of law-abiding Americans of sound mind.” 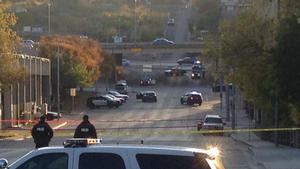